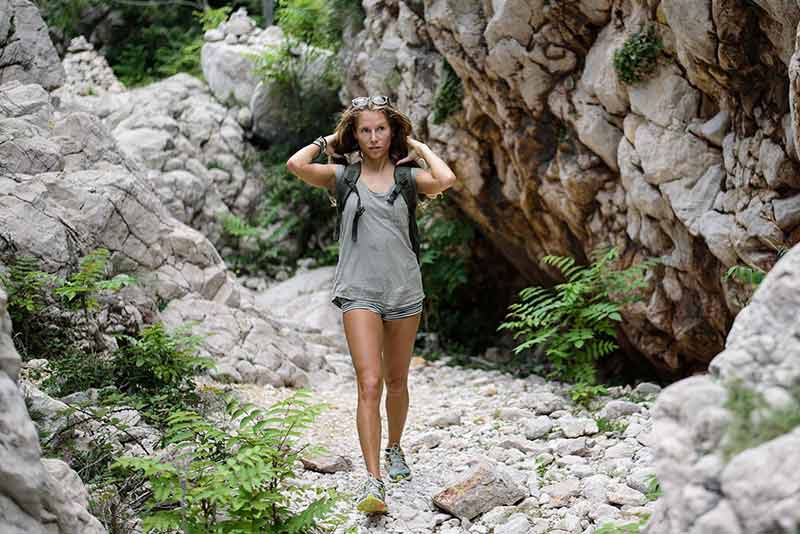 Many of us enjoy hiking or jogging along the trails of our local, state and national parks.

However, how many would consider carrying a firearm during a hike, jog?

Think about it. If you are a mugger, murderer or sexual predator, what better place to launch an attack on an unsuspecting victim (especially a female) then in an isolated area near a trail in the middle of the woods?

How many hikers or joggers would ever think that they would be robbed, assaulted or murdered along their local, state or national park trail?

Unfortunately, attacks can and do happen. Here are a few examples of hiking and jogging attack stories.  If you’re a female jogger or hiker who is thinking about getting your first gun, you may want to read this.

January 1, 2008, Meredith Emerson, 24, went hiking with her dog Ella, along a trail on Blood Mountain in northern Georgia, as she had done many times before. At some point, she was attacked by a drifter, Gary Hilton, 61, (who turned out to be a serial killer). According to Hilton, he targeted 24-year-old Emerson because she was a woman.  However, Emerson put up a valiant and unanticipated fight such that Hilton almost lost the upper hand. And despite Emerson being young and trained in martial arts, Hilton eventually subdued her by punching her in the face and convincing her that all he wanted was her ATM card and PIN.

After 3 days of captivity, Hilton told Emerson that he would set her free, but instead he tied her to tree. He subsequently told her that he was going to his van to make coffee but when he returned, instead, beat her to death with a car jack handle from behind. Here is a link to a news report about this tragic event.

According to Hilton, he targeted 24-year-old Emerson because she was a woman.

October 2017, an unknown man tackled a UC Berkeley student from behind as she was jogging along a the Upper Fire Trail in Berkeley, CA at approximately 7pm. The man attempted to remove the student’s shorts and groped her. Fortunately, the student was able to fight off her attacker causing him to run off.  Here is a link to a news report about this attack.

September 16, 1992, Sheri Ball-Garcia, 28, went for a run at about 5:30am along the Honoapiilani Highway, in Kaanapali, Maui. Ball-Garcia felt safe running along this road as she admired the amazing natural beauty around her. As she completed her second mile, a man who stood 6 feet tall and approximately 220lbs, grabbed her and punched her in the face, breaking her nose. He then threw her over the guardrail to shield her from public view. Subsequently, her attacker smashed her face into rocks for several minutes. Her attacker then sexually violated her with his fist until she bled and proclaimed that he would rape and kill her. After her pleas fell on deaf ears, he pulled down his pants. Ball-Garcia saw this as an opportunity to dive into the water and swim to a buoy for safety. Almost immediately thereafter, she heard police sirens as several law enforcement cars pulled up near where her attack began. Ball-Garcia had suffered 13 fractures to her skull along with 7 to her nose, 2 teeth knocked out and had significant injuries below the waist. Here is a link to this heart-wrenching story.

September 15, 2017. Austin, TX, Josh Williams, 39, who has been licensed to carry a gun for about 10 years, was jogging along Austin’s busy Hike-and-Bike Trail at approximately 5:30am when he heard screams from a woman. He then used his flashlight to find that a man was on top of the woman, attempting to sexually assault her. Williams then pulled out his gun (a Glock 43) and ordered the man to get off of the woman. The attacker told Williams that he knew her, but the woman told Williams that she did not know him.The man, who police later identified as Richard McEachern, 22, ran off.  Below is a link to the story.

What is the Takeway?