For those familiar with the AR-15, 5.56 NATO is a very loud round (mid-to-upper 160dB range), especially when shooting through a barrel shorter than 16” or if using a muzzle brake to reduce recoil.  Now, if your AR has both a short barrel (the shorter the barrel, the louder it will be) and a muzzle brake, the incredibly loud sound and concussive force it produces will make it very uncomfortable for both you and anyone nearby, especially if shooting at an indoor range.

A good suppressor (aka Silencer) can reduce the sound of an AR-15 by as much as 30dB±. While that won’t exactly make your AR “hearing safe”, it does make shooting your AR much more pleasant.

In the last few years, there has been much more interest in the suppressor market. One of the most respected and reasonably priced suppressors are those from Yankee Hill Machine.

Yankee Hill Machine started out in 1951 as a small machine shop. In 2005, they entered the market with their first suppressor, the “Phantom”, a dedicated 5.56 NATO suppressor with a Quick Detach (QD) mount at a price that most gun owners could afford. Since then, YHM has expanded their line of suppressors as well as manufacture their own AR-15s and other firearm accessories.

Why Get The YHM Turbo?

As of early 2020, the original Turbo was replaced by the Turbo T2.

If you shoot shorter barrel AR “pistols” indoors, you know how loud they can be, especially when using a muzzle brake. Here are a few reasons why you might consider the YHM Turbo:

What’s Included with the YHM Turbo

The YHM Turbo ships with:

Having shot a few hundred rounds through different AR-15 “hosts” (the firearm onto which you mount a suppressor) from 16.5” down to 10.5”, I can say without question, the YHM Turbo is AWESOME.  When shooting indoors with 55gr 5.56 NATO from a 10.5” barrel, it significantly reduces the sound level. In fact, shooting a 10.5” AR pistol with the YHM Turbo is noticeably quieter than a 9mm handgun. The YHM Turbo also eliminates the concussive force that an exposed muzzle brake would have unleashed. The YHM Turbo, as with most any suppressor, also reduces muzzle flash that you would get if using the muzzle brake alone.

Is the YHM Turbo Hearing Safe?

In my opinion, no suppressor is really hearing safe. Regardless, I always double up on ear pro, but I prefer to call it what it actually protects), even when using a suppressor.

Below is a chart from the American Suppressor Association that can help better explain how exposure to noise can damage hearing.

Should You Use Frangible Ammo with your YHM Turbo Suppressor?

According to the YHM Turbo owner’s manual:

A Few Tips About Attaching and Removing the YHM Turbo

When you attach your YHM Turbo to the QD muzzle brake for the first time (before shooting any rounds through it) it may be very hard to twist/snug it down. After shooting some rounds through your YHM Turbo and returning home from the range, take a damp paper towel (folded a few times for strength) wrap it around the QD muzzle brake and grasp entirely with your hand and twist left and right to remove any carbon. Your damp paper towel should be blackish from the removed carbon. Do this a few times and wipe the muzzle brake dry. When you do this you may notice that the muzzle brake will look shiner as some of the finish has been worn off. You may also want to clean the inside threads of the YHM Turbo.

Now, your YHM Turbo should be easier to twist on and off. You may want to get in the habit of wiping down your muzzle brake threads and suppressor mount after every trip to the range. If not, then you may have trouble ratcheting down your suppressor 100%.

When you ratchet down the YHM Turbo, make sure the 4 teeth of the muzzle brake’s spring-loaded collar, sit in the space between the opposing ratcheting teeth of the Turbo suppressor’s mount itself.

YHM recommends that you use a quick snapping twisting motion to ratchet your suppressor down. In other words, don’t slowly twist the suppressor when you get to the point where you need to begin ratcheting it down.

If you find that the muzzle brake’s four teeth do not sit in the space between the Turbo’s ratcheting teeth, use two fingers to twist the muzzle brake’s spring-loaded collar back slightly and you should hear/feel the teeth snap into place. Your YHM Turbo should now be securely attached to your host.

If for some reason the teeth end up tightly on top of each other so that you are unable to twist the spring-loaded collar on the muzzle brake, YHM recommends just leaving it like that. However, I found that to leave it like that either crushed down the outer edge on a few of the teeth on the suppressor itself, or you could rotate the Turbo slightly and the teeth should back off one another, leaving a small amount of rotational play. YHM said that the small amount of rotational play is fine and not to worry about it. If that rotational play bothers you, like it did for me, you may want to try putting a different Phantom muzzle brake on your host.

From what I’ve seen, the determining factor as to whether or not the teeth line up correctly when ratcheting down depends upon the particular Turbo suppressor mount being attached to a particular YHM QD brake. In other words, your Turbo suppressor may not ratchet down with ideal teeth alignment on all Phantom QD brakes, at least that’s been my experience.

Trouble Removing Your YHM Turbo from its Host?

Get a Heat Resistant Suppressor Pouch and Gloves

Suppressors get hot, even after shooting just a handful of rounds. It’s been reported that a suppressor can easily reach temperatures of around 300-500°F±. When shooting many rounds continuously (i.e. mag dumps), a suppressor could get as hot as 1000°F±. Therefore, you may want to purchase a “heat resistant” suppressor pouch and a pair of heat resistant gloves to avoid burning your hands and your gear.

The Vulcan Suppressor Pouch from Cole-TAC is an outstanding heat resistant suppressor pouch. Why? Because it uses the same proprietary fire-resistant material that is rated to 1800°F found in their suppressor covers. This means you don’t have to wait for your suppressor to cool down before packing it up to leave the range. It costs about $70, but I think it’s well worth it. By the way, the images of the Vulcan suppressor pouch you’ll find most everywhere on the web are usually those of it’s slimmer 1st generation design. The newest version is much wider (see the image below). 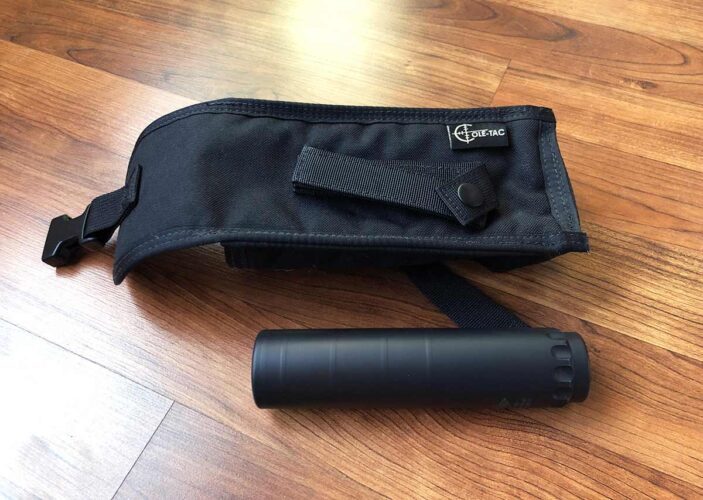 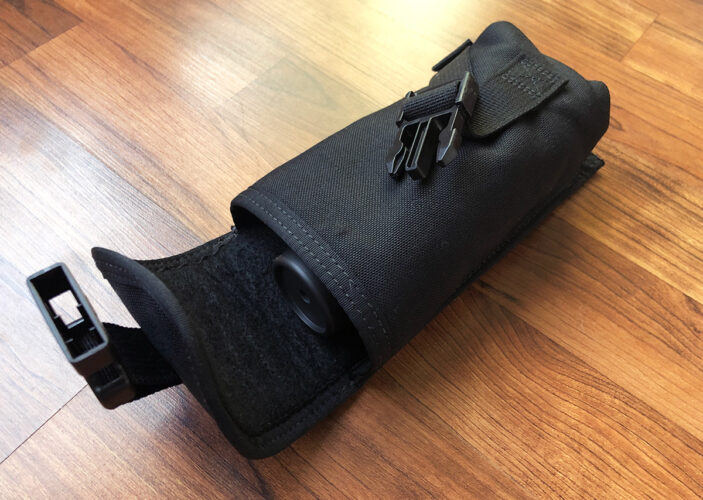 I had previously bought the YHM suppressor pouch which uses a Basofil lining, but according to my research, Basofil is heat resistant only up to about 400°F (significantly less than the 1800°F rating of the Vulcan Suppressor Pouch from Cole-TAC), which means you may need to wait a little while before you can put your hot suppressor in it, especially if you’ve been shooting a lot.

Obviously, when removing your hot suppressor, you don’t want it to directly come in contact with your skin. That’s why it’s a good idea to also get a good pair of heat resistant gloves.  I ended up buying the Blue Rhino Aramid Fiber Fire-Retardant Grill Glove from Lowes (it’s a single glove, so you would need to buy two, if you want a pair) together with a silicon mit to remove my hot suppressor from its host.

Not surprisingly, the YHM Turbo, like many suppressors, produces quite a bit of additional back pressure and blowback resulting in more gas in your face/eyes as well as making your AR a lot dirtier. That’s because suppressors slow down and create a more pressurized gas running through your DI system than there would normally be when not using a suppressor. The greater pressurized gas, together with carbon, dirt and unburned powder is vented into your AR’s action. For this reason, adjustable gas blocks were used on most of the hosts during testing of the YHM Turbo which definitely reduced the amount of gas in the face/eyes. In fact, without an adjustable gas block, the gas to the eyes was quite overwhelming.

Some additional measures you can take to reduce the amount of gas that hits your face/eyes might be the use of a “gas buster/diverting” charging handle such as the Griffin Armament SN-ACH or a heat resistant silicone (RTV) along the inside curve of the charging handle, an AR Gas Vent, an adjustable BCG from Bootleg or Gemtech or any combination of these.

If you are thinking about getting a quality suppressor that offers really good noise reduction at a very reasonable price, you may want to consider the YHM Turbo. Please note that Yankee Hill Machine has since introduced the Gen 2 Turbo T2 and the smaller Turbo K. Unfortunately, the YHM Turbo and Turbo K are very hard to find in stock anywhere online or locally. So if you do find one, you may want to snag it. 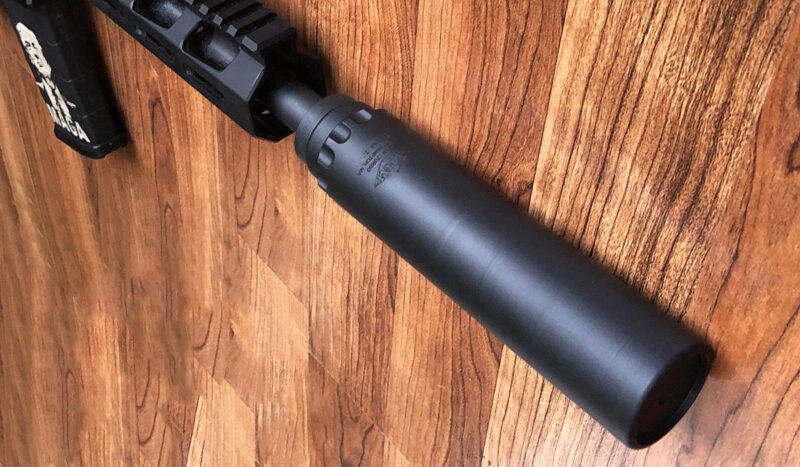 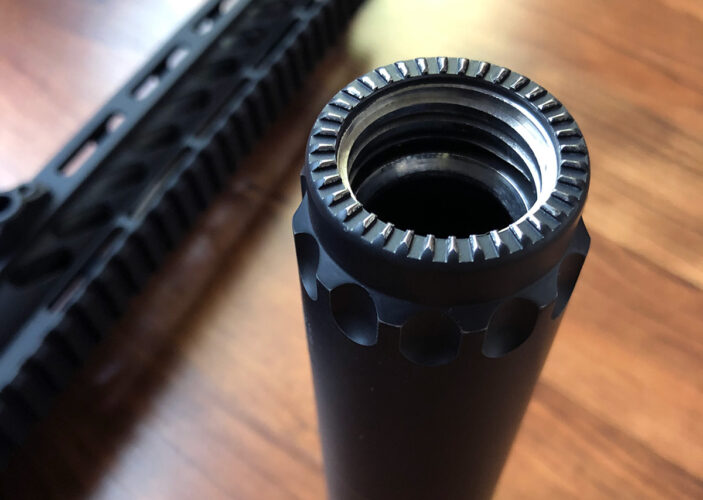 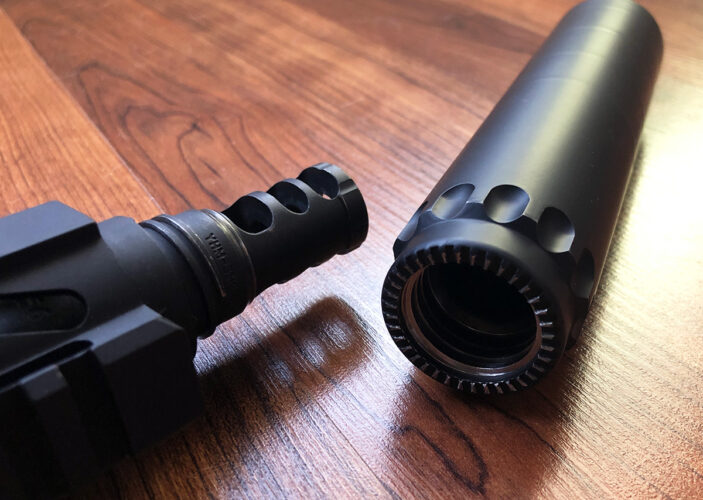